Erik Matti is a very popular mainstream filmmaker in his home country of the Philippines. The man has worked in the movie industry since the mid-1990s as a writer, director, actor, and even producer. He has embraced the tenets of commercial filmmaking and though his belief that craftsmanship and storytelling trump highfalutin ideas and delivering well-worn humanist messages these beliefs have divided the director with many Filipino cinephiles and indie filmmakers who are struggling on a day-to-day basis to complete their own films. Whether or not one espouses Matti’s viewpoint about cinema and art it’s hard to ignore the man or his work. He has slowly gained quite a lot of attention these last few years and many people, foreign and domestic, have shown support for the man’s work.

Although I have not seen a majority of Matti’s oeuvre, I must say that the attention that his films have garnered is a positive move forward for the national cinema of the Philippines. The country’s film industry has had to endure a lot of over the decades and the shadow of Hollywood has always loomed large over the entire country. What few films that emerged for viewing to foreign audiences were often noirish melodramas usually directed by men like Lino Brocka or Brillante Mendoza that showcased the squalor and moral corruption prevalent in the Philippines. Now even though a majority of the population does live well below what many in the First World would consider the poverty line a cinema that only shows the bleak and dire is a dishonest cinema. The country, its people, and its art scene are multifaceted and sometimes splintered into various sub-groups due to the various dialects spoken in the country. In fact, due to its long history as a colony, be it Spain, Japan, the US, the Philippines is an amalgam of Old World and New World influences.

As for its cinema, with the invention of DV cameras there has been a renaissance within the indie film scene there. Fueled by pioneer masters like Kidlat Tahimik, Raymond Red, and Lav Diaz young filmmakers in the Philippines are going out onto the streets, imbued with a DIY aesthetic, and starting to craft their own personal films. Sadly though, for every art-house success like Six Degrees of Separation from Lilia Cuntapay (2011) there are mountains upon mountains of high concept but low budget arthouse pictures, poorly scripted but interesting genre fare, and head scratching contemplative films. And as highly lauded as these films are they do not make a dent in the local box office. Now of course, you’ll be hard-pressed to find a Filipino that would label Erik Matti as an arthouse director but whether you love or hate him he makes profitable well-made pictures. And as South Korea has proved a solid commercial industry is the bedrock of a strong national cinema.

Rigodon is an erotic melodrama that tells the story of three flawed and emotionally damaged characters. There is Riki (John James Uy) a manipulative narcissist whose sense of self-entitlement is rivaled only by his insatiable sexual appetite. Established at the start as a Z-grade celebrity, Riki though is not a one-dimensional despicable character, he may lie and cheat but he is not driven to be bad because he is a bad character. Instead as the film unfolds we see the desperation and hunger, akin to Tony Curtis’s Sydney Falco character in Sweet Smell of Success (1957). Playing Riki’s put upon wife is Regine (Max Eigenmann), a housewife who must have had dreams of her own before meeting Riki but now is relegated to baking cupcakes for Riki’s mistresses. And finally there is Sarah (Yam Concepcion), the mistress figure in the movie and honestly the most sympathy of the three. She is young, beautiful, and worst of all desperate to give her love to whatever man is willing to take it. 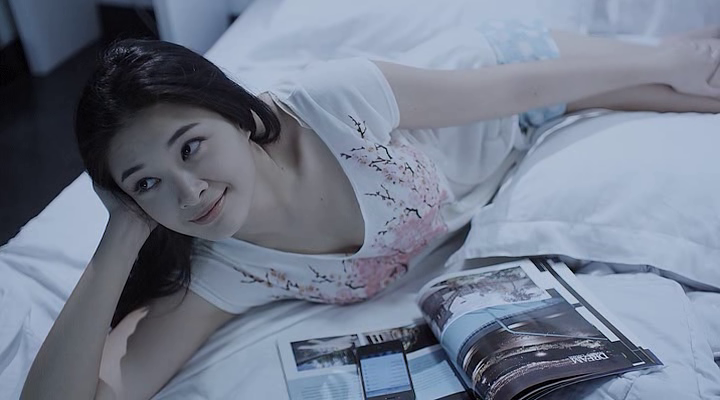 A lot of what raises the film above the level of titillation is the amount of screen time that Matti devotes to showing the inner lives of these characters, not just through expository dialogue but through quiet moments when they are just going about their day-to-day business. Though we only see one of Riki’s affairs the movie has scenes that give us clues that this man is a habitual adulterer and has plenty of secrets. One of which involves a debt to a creepy spinster who commands a gang of muscle that do her bidding while she grooms her paraplegic father. As for Regine, her isolation and dependency on Riki’s erratic paychecks has forced her to consciously ignore all the signs that Riki is a total scumbag. Their marriage is broken but the thought of leaving him has never crossed her mind. In a telling scene where Regine attempts to talk to her family in Cebu, the strained expression on her face while attempting to make small talk says it all, there is no place for her other than the home she has built with Riki. She is shackled to him, emotionally and financially.

Similarly, Sarah also suffers from an overbearing male figure, but instead of it being a husband or lover it is her father, a man who cares for her but shows it by constantly questioning her judgment. Going from boyfriend to boyfriend she attempts to build something of a relationship with men but in the eyes of Sarah’s father no one is good enough for her. When she finally does break free from him she runs into the arms of Riki, hoping that this man is a far better protector and lover, but her emotional dependence on Riki eventually makes her unattractive to the man.

Aside form the love triangle Rigodon can be seen as a statement about the noive riche in the Philippines. Riki may not be a big star but he lives an upper class lifestyle. His clothes, his car, the food his family eats, and even the way he speaks is completely foreign to most Filipinos. In the Philippine language he would be described as a mestizo, a term used to describe a person who has White European ancestry. Trying to keep up with the Joneses Riki’s home life resembles an American middle class existence. He is a native foreigner, too white for Filipinos, and he is even made fun of due to the way he speaks Tagalog in an “American” accent. Regine, on the other hand, is the typical Filipina wife and mother. She keeps the house in order, takes care of her child and husband, and pretty much has no life outside of her home. She lives in a golden cage unlike Sarah whose innocence damns her at the end.