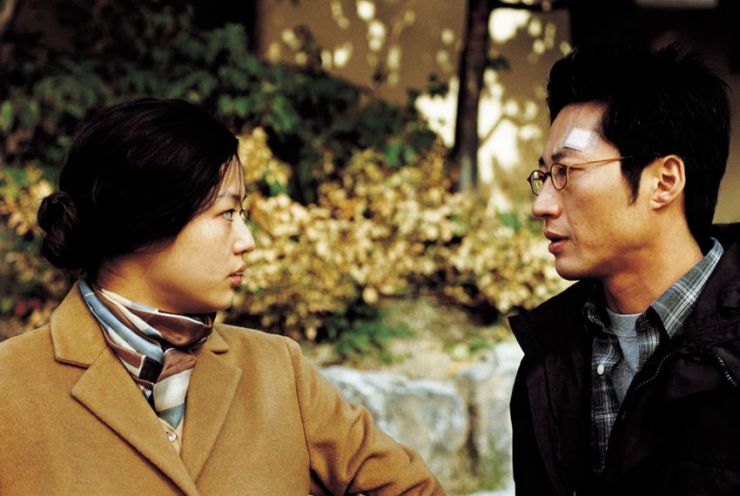 The Fusion Pizza-Dog. It’s perhaps the most perplexing, and yet seductive example of the fusion food that permeates the South Korean landscape. Like this bizarre mix of food, the borders in which we define film genres have become narrower and narrower, as our tastes have become more diversified and desensitized. We long ago entered an age of fusion cinema. During the height of the Korean wave, local filmmakers injected a rabid mix of fusion into their cinematic ovum (perhaps it existed earlier and I am blindly unaware). Memento Mori (1999), A Tale of Two Sisters (2003), The Legend of Evil Lake (2003), and the grand daddy of all genre-defying South Korean films Save the Green Planet (2003), all contained elements of horror in varying degrees, but you could hardly label any of them as “horror movies.” And much like those films, Lee Su-yeon’s The Uninvited, whose Korean name translates roughly as “Table for 4” (a name, while far too bland, is much more fitting) does the same.

Jung-Won (Park Shin-yang) is an interior designer with no memory of his childhood. Exhausted from work and the anxiety of his looming marriage to Hee-Eun (Wang Soo-yeon), Jung-Won falls asleep during the subway ride home. Moments before the doors close and the train pulls away from the last station, Jung-Won awakens, rushing off the train. As the doors close behind him, he notices two young girls, both of whom are asleep, trapped on board. Jung-Won, a man who appears to have been beaten into submission by the claustrophobia of modern urban living, ends up doing nothing. The following day, a news program on the radio reports that two girls were found on the subway, poisoned by their mother and left for dead. Upset, but not irreparably affected by the news, Jung-Won returns home. He finds that his fiancée Hee-Eun, a far more successful interior designer, has installed a post-modern lighting design around a glass table in their kitchen. The lighting is supposed to clearly illuminate everyone sitting at the table, leaving the rest of the room in darkness, providing the perfect atmosphere for dinner time conversation. However, it’s not Jung-Won’s future family that christens the new dinner table, but the ghosts of the two dead girls. The Uninvited is a subversive horror-drama which ultimately focuses on repression, guilt, and trauma. All the key characters in the film hide some secret or traumatic experience they feel an urge to repress. They are either forced to develop ways of dealing with it, or it slowly devours them. Jung-Won’s guilt about his failure to save the lives of the two girls and his subsequent repression of these feelings, slowly unravels his life. Yeon, played by uber-actress Jeon Ji-hyun – in what was then a surprisingly restrained role, a big change from My Sassy Girl (2001) – the only other person who can see the spirits of the two dead girls, struggles to deal with the death of her child, collapsing at the mere sight of any measure of trauma. Lee uses the trimmings of the horror genre as a form of protest, stripping it down to its bare essentials and disposing of the rest. It criticizes everything from religion and faith (a subplot involves Jung-Won’s father, who operates a church), society’s obsessions with image and appearances, patriarchy, masculinity, and urban isolation. It drew some attention as possibly being a critique of the South Korean government’s helplessness surrounding an incident June of 2002, when two American soldiers ran over and killed two South Korean girls and were subsequently found not guilty by an American military court and shipped back to the USA.

It’s is a heavy film, meticulously paced with no visceral catharsis. And such weight is ultimately what hurt it the most, polarizing audiences that bore witness to its cinematic glory. While it received generally good reviews by critics in South Korea, it didn’t fare too well at the box office, which is understandable. If you enter this cinematic experience thinking it’s going to scare the living hell out of you as so many other Asian horror films, especially from that time period were know to do, you’ll end up bored and perplexed, especially with its running time of 126 minutes. There are no cheap scares in this film. The Uninvited is a film that requires patience and a complete devotion of mind, body, and spirit, but is ultimately rewarding.