Japanese films that chronicle the trails and tribulations of youth are such an industry fixture that most directors can deliver a pleasing coming-of-age tale that covers all the necessary beats, although it takes a real talent to do something unexpected with the angst-ridden formula. Ryohei Watanabe is such a filmmaker as his debut feature Shady takes the often-explored scenario of ill-fated friendship down a seriously troubling avenue with its quietly gripping mix of deft character study and insidiously creepy atmospherics. Misa (mimpi*β) is a socially isolated high school student who has been given the cruel nickname of Pooh due to her surname, “Kumada” (bear + rice paddy), and awkward appearance. She is suddenly befriended by Izumi (Izumi Okamura), an attractive classmate who struggles to fit in due to the other girls being jealous of her looks, particularly the head bully, although Izumi’s charms are highly effective on the part-time mathematics teacher who provides her with exam papers in advance. After years of only having only pets for company, Misa initially enjoys spending time with Izumi and their relationship becomes increasingly intimate. However, she becomes a little uncomfortable with Izumi’s eagerness to constantly be around her and has trouble accepting some of her new friend’s behavioral traits, such as committing acts of petty theft. At this point, Shady makes a subtle transition from teen drama to psychological thriller as Izumi’s possessiveness takes hold and Misa begins to fear for her safety but has no one to turn to for help. 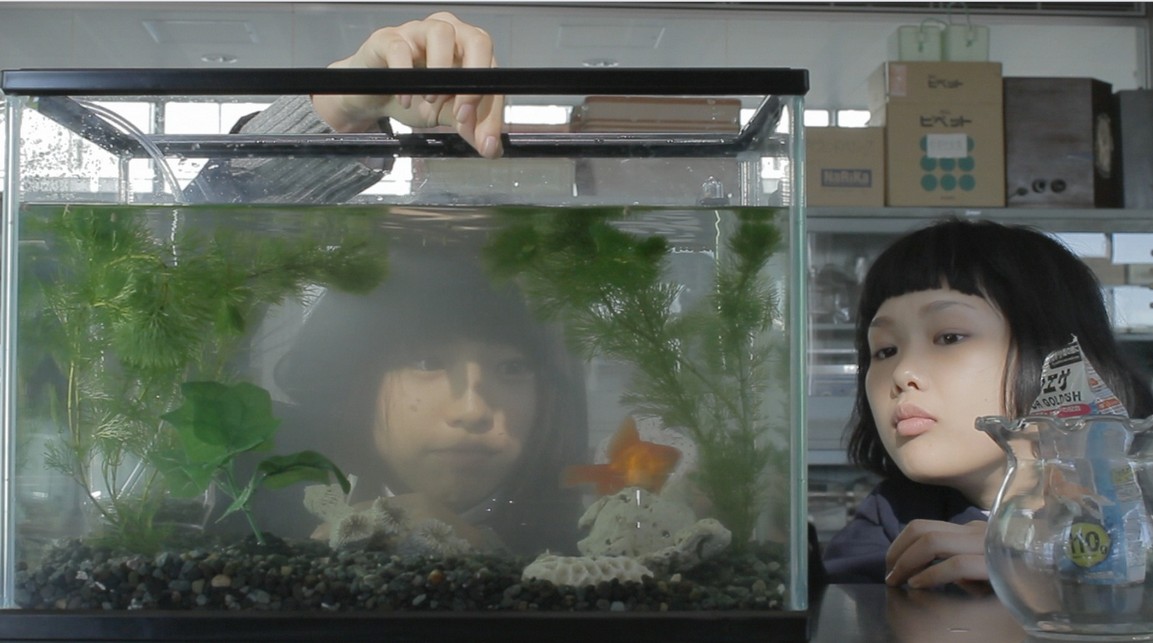 Shot on a shoestring budget, Shady benefits enormously from Watanabe’s experience in commercials as he makes the most of the mundane suburban locations in which the story is contained. Scenes in small apartments, classrooms, buses, and shops are tightly framed, trapping the protagonists in a stifling environment, with even bike rides around the surrounding countryside suggesting that this is a small world where there is relatively little chance of escaping boredom or cruelty. There are plenty of references to caged existence, notably Misa’s parrot Chunta, and the school goldfish Kintaro, whom she attends to until Izumi’s extreme need for attention abruptly removes that responsibility from her schedule. Much of the first half finds Watanabe in observational mode, keeping a distance from his protagonists so that we can register their distinct personalities and the manner in which they are drawn to one another: Misa is always guarded with her hunched posture and cautious exchanges, while Izumi is wide-eyed and confident, with a dangerous streak, yet just as much of a victim of bullying, albeit for a different reason than her chosen confidante. As their friendship blossoms, Watanabe’s employs tracking shots to capture the emotional exhilaration that comes from finding someone special in an environment where such a bond seems most unlikely. However, as Izumi’s mood turns, the film’s editing style gets tighter and the visual palette, which was already fairly muted, becomes darker, while everyday sound effects such as the clicking of a pen are emphasized to note Misa’s encroaching paranoia.

One of the main strengths of Shady is its sure-footed pacing and economical approach to narrative, with Watanabe paring everything down to the point that not a single frame feels extraneous. In the digital age, when even cash-strapped independent filmmakers can make undisciplined epics providing that they can convince the cast and crew to cater to their esoteric whims, this is something of a rare feat. Watanabe keeps Shady as tightly-wound as possible, often making it play like a throwback to the low-budget Japanese genre cinema of the 1990s, although the director’s preference for naturalistic performances and tasteful piano music indicates that European art-house auteurs are just as much of an influence as early Kiyoshi Kurosawa. While it’s not too difficult to guess the ending from the mid-point, Shady maintains some element of surprise through a few neat red herrings, while the convincing performances by its lead actresses keep the emotional stakes at fever pitch. When the big reveal hits in the third act, Misa’s unraveling due to the sickening reality of her situation is more distressing than the eventual bloodletting, which comes courtesy of some perfunctory gore effects. Due to its compactness and the likelihood that Watanabe will progress to projects that are wider in scope after winning the Entertainment Award at the PIA Film Festival, it’s tempting to describe Shady as a successful ‘calling card’, but it can be best summarized as a razor sharp genre-splicer that will soon become a firm cult favourite.