The sports film or documentary of the losing athlete, the losing team, is a genre within itself. We can’t all be winners and we often reveal more about ourselves in how we lose. How we respond to watching people lose can also tell us something about ourselves. Do we laugh with the subjects as we pull the connecting threads of human folly? Or do we create a distance from our subjects with laughter or irony? Do we investigate the structural factors that create ‘winners’ and ‘losers’? Or do we focus solely on the individual as the source of the triumph or failure?

Thankfully, Mike Brett and Steve Jamison’s Next Goal Wins shoots for the more productive goals of such a documentary as they follow the lowest-ranking FIFA national squad, American Samoa, a team that experienced the biggest FIFA-sanctioned defeat in history, a 31-0 drumming by Australia’s Socceroos. Coming off its screening at the Tribeca Film Festival, one of the most anticipated of the documentaries on offer there according to website Nonfics, it will begin a week long run in my home of San Francisco at The Roxie on April 25th

This American Samoa team is pretty bad and they know it. We first follow them as they try to make things better for a regional tournament. We witness a pep talk from a sports psychologist who mentions Mt. Everest is in North America. This is not played for laughs, which is what I appreciate about Next Goal Wins. It can be coupled with the other pep talks, the other sporting cliches yelled at teams to rally them or dispirit them. It’s management myths like these that represent the shallowness of the surface that doesn’t get at the core struggles underneath. 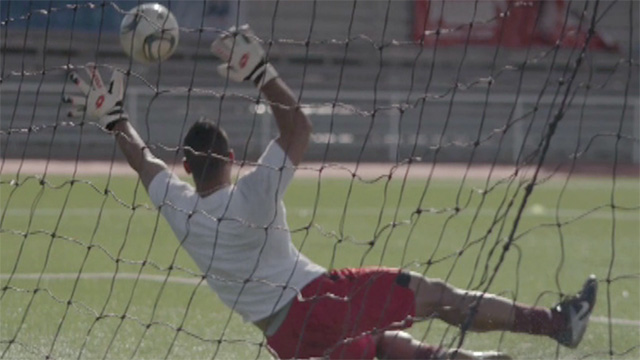 Realizing they desperately need professional help, out goes the call for assistance from the U.S. Soccer Federation. Enter Dutch coach Thomas Rongen who played alongside some of the best, such as George Best and Johann Cruyff. He has the skills and knowledge to move this team slightly forward, yet he runs into some disconnect with Samoan cultural norms. In addition to bringing in new practice methods, Rongen brings over some American Samoan players from overseas to improve the team’s chances.

Although a documentary is recording something ‘real’, there is still a constructed narrative. And when constructing such docu-narratives, we can fall into cliches. Another aspect of what I appreciate about Next Goal Wins is the wider scope on Rongen’s tactics. This is not a coach pushing players until they fall over exhausted assuming this is the only way to rise victorious. The state of American Samoan football is put in context with not just Samoan culture, but with the influence of global economics and sport as well. To his credit, Rongen realizes he has to learn as much as teach, and when the coach he replaced, ‘Ace’ Lalogafuafua, tells him about why the players might be exhausted on the field, we learn it might not be because of too little conditioning, but too much. Many of these players have multiple jobs in addition to the practices. As a result of this helpful wider context, the directors don’t show us men forced to torture themselves through overzealous conditioning exercises. We don’t have the film reinforcing unhealthy demands of hegemonic masculinity that often have men harming themselves and others. As Rongen and Lalogafuafua have this discussion while walking the islands’ highest peaks, we learn these are men in touch with the reality on the ground.

Speaking of challenges to portrayals of hegemonic masculinity, the film also introduces us to Jaiyah Saelua, the first transgender footballer to start a World Cup qualifying match. A member of Samoa’s third gender, fa’afafine, she has the skills to have major impacts in her team’s games, showing us that her gestures and motions that society has demarcated as ‘feminine’ do not inhibit her ability to defend. She says she ‘runs like a girl’, but she shows that such should have no bearing on whether or not she can contribute. As the new sport’s equality mantra goes, ‘If you can play, you can play’ and Saelua can clearly play.

In addition to Saelua and coach Rongen, there is significant time spent on the back stories of the three expats on the team, each with a unique angle of focus within a larger diasporic American Samoa community. The goalie against whom the 31 goals were scored, Nicky Salapu, wants to redefine his sporting legacy. Rawlston Masaniai is provided an opportunity to visit the islands of his ancestors through Rongen’s recruitment, and soldier Ramin Ott is able to represent both his countries with honor.

The arc of Next Goal Wins isn’t what Hollywood more often expects of its lovable losers. This is more Silver Linings Playbook (2012) than Major League (1989). But the arc is what this viewer prefers, a nuanced portrayal of life more often lived, because if we’re honest, most of us have lost many more times than we’ve won.

For my fellow San Francisco Bay Area folk, here’s the screening times for Next Goal Wins at The Roxie beginning April 25th – http://www.roxie.com/ai1ec_event/next-goal-wins/?instance_id=2027

*** – The initial post of this piece had a final sentence in the third paragraph that noted a grammatical mistake in the inlaid titles. I removed it since I have since learned that treating the word ‘team’ as a plural and conjugating verbs accordingly is completely accepted grammar in British English. English is a global language that takes on various forms where it is used. Since it started in England, I’ll defer to them on this one and I will treat  “The team are” as acceptable usage.