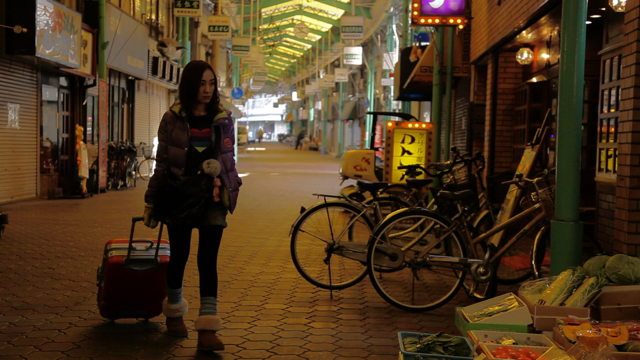 An accelerated China and a stagnant Japan intersect in New World, an engaging exploration of cultural exchange from pan-Asian filmmaker Lim Kah Wai. Mostly located in the Shinsekai district of Osaka, with the English translation of the area providing the film with its title, it focuses on Coco (Shi Ke), a young woman from Beijing who has travelled to Japan during the Christmas season due to feeling dissatisfied with her life in China’s booming capital. Coco has comfortable existence through her circle of friends and the luxurious trappings provided by her boyfriend Jimmy (Liu Dunlin), a workaholic businessman who arranges for Coco to be chauffeured around the city. After an argument with Jimmy due to his dalliance with some party girls, Coco flies to Osaka, where her friend Ivy (Miyawaki Yan) is studying while also working as a hostess in a bar. Coco asks Ivy to take care of her hotel arrangements and expects to stay in a five-star establishment, but on arrival is instead taken to a shabby downtown hostel run by Masanobu (Ogawa Takeru), who is aiming to revitalize his family’s business by attracting more guests from overseas. Uncomfortable with the basic accommodation, Coco leaves to stay with Ivy, but soon finds herself mixed up in a dangerous situation: Ivy is contacted by gangsters who are demanding ¥5 million in ransom for her boss, Eri (Tomonaga Eri), who has attempted to flee from the considerable debt that she has accumulated by trying to keep her bar open.

What follows is a nocturnal adventure of sorts with Coco liberated from the stylish but impersonal modern interiors that constitute her existence in Beijing and forced to adapt to new surroundings that are not exactly what she had expected after learning about Japan from fashion magazines. She finds unexpected assistance from Komei (Tomonaga Komei), the young bilingual son of the kidnapped bar owner, who acts as her translator, and she sets aside her touristic expectations to protect him when it looks like they are being followed by a menacing heavy. If this ‘new world’ turns out to be rather old in terms of its architecture – Coco comments that it ‘looks like Beijing twenty years ago’, although Ivy retorts that she actually has little knowledge of China’s capital at that time – it is new with regards to opening her horizons on the importance of friendship. The film benefits greatly from its use of an atmospheric, if admittedly run-down, part of Osaka, which intermittently results in an unreal ambience that is reinforced by much of its slight narrative taking place after hours. A foot chase that has Coco and Komei fleeing through a backstreet porn cinema is less concerned with generating suspense than it is with showing the curious nature of an area which is, to some extent, lost in time. Recurrent encounters with minor characters, such as a homeless man who baffles Coco by spouting Maoist rhetoric, add to the impression that the naïve tourist has slipped into a strange netherworld.

Despite this dreamlike ambience, New World still touches on uneasy Sino-Japanese relationships. In Beijing, Coco’s driver recalls how as a younger man he went to Japan to seek his fortune but returned home once China began to prosper, while characters in Osaka discuss the inflated cost of imported items and potential trade disputes in a manner that can seem slightly stilted. These cultures see one another as exotic ‘others’ due to generalized understanding, with Coco’s knowledge of Japan barely extending beyond its fashion trends and the Japanese characters having limited contact with China through affluent tourists, brushes with luxury that, in turn, position Beijing as a ‘new world’. Leading actress Shi is a pleasant screen presence but Coco remains a vague character throughout and is mostly required to serve as an audience surrogate. Coco’s lack of backstory beyond her relationship with Jimmy is emblematic of the identity-challenged nature of a post-1980s generation that is living in a globalized sphere, yet it makes her development less affecting than probably intended. However, the supporting players in Osaka create a credible sense of social-economy in tailspin with their reserved desperation and diminished optimism. Although its cross-cultural observations ultimately result in predictable universality as Coco discovers the value of friendship, New World is nonetheless a charming travelogue with a very particular sense of space. Lim has recently completed the companion piece Fly Me to Minami (2013) which is set in a more upscale area of Osaka and is definitely a name to look out for on the festival circuit.