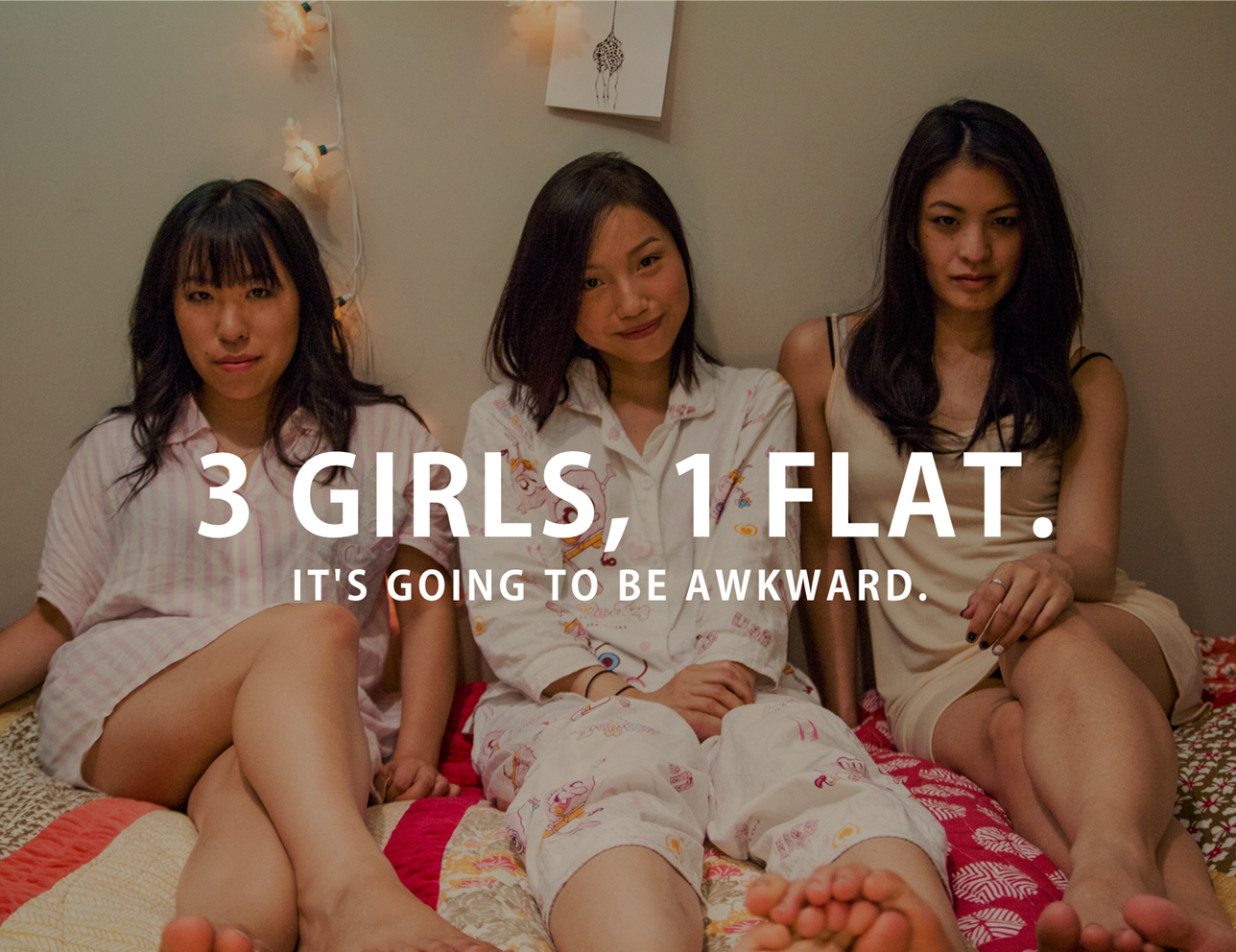 I was delighted to hear that Roseanne Liang’s New Zealand web series Flat3 would be coming to San Francisco’s CAAMFest 2014 (and, yes, the official title of Flat3 has no space between the word and the number). A web series about 3 Chinese-Kiwis living in the same flat in Auckland, Flat3 recently secured funding for a third season in 2014. Choosing to show a web or TV series from another country enables an opportunity for festival-goers to be introduced to pop culture elsewhere. I wish this was done more often in movie housess and festivals. I have great memories of walking through the fog of SF’s Richmond district to see the wonderful Italian historical TV drama The Best of Our Youth (2003) at the Balboa Theatre.  Although The Best of Our Youth was intended to be watched episodically when produced in Italy, each episode whetting the viewers appetite for the next, it still worked as a feature lumped together over two nights. Now that we can binge watch modern episodic television, and television is considering the reality of these all-night marathons in their planning of such productions, it makes sense that webisodes can be watched in immediate succession as well.

But Flat3‘s first two seasons have been, and still are, available on the web. And they have been for some time. When it came time for questions at the announcement of the CAAMFest schedule, I asked CAAMFest Festival & Exhibitions Director Masashi Niwano if Flat3‘s web-accessibility aroused debate on whether or not to include it in their selection. Niwano elaborated that Liang had created a special installment to screen at CAAMFest. (Flat3 actress Perlina Lau would clarify for me that this was actually a special ‘video skit’ they were preparing, not an episode. This technically made Flat3 a world premiere. In addition, Liang will be making her first trip to attend CAAMFest, Liang not being able to attend the past CAAMFest screening of My Wedding and Other Secrets. (Although this will not be her first trip to San Francisco since her husband is a game designer and she’s come out to SF while he attends the Game Developers Conference.) Watching the webisodes with others on a big screen rather than at home on a computer screen, CAAMFest demonstrates what the web has yet to figure out, the thrill of witnessing a premiere among physically present others. Add to this Liang’s presence at the March 16th screening at New People Cinema at 2:30pm and CAAMFest is giving us much more than what a Skype interview could do.

But the tyranny of distance is still a physical reality for a country so far from the US as New Zealand. The internet is still a valuable tool when trying to speak with Liang before her trip across the pond to CAAMFest. She graciously offered to answer some email questions for me, as did the Flat3 3, actresses JJ Fong, Perlina Lau, and Ally Xue. Some of the questions are cheeky, some serious, just like Flat3.

Adam H. – Your short film “Take 3” was included in Hamish McDouall’s book 100 Essential New Zealand Films (AWA Press, 2009) and your debut feature film My Wedding and Other Secrets (2011) was well-received. What led you to pursue a web-based series as your follow-up project when you seemed to be on a film roll?

Roseanne – Film remains the dream, and while I like to think I’m still on the roll (please, let it be!), independent film seems to be a marathon right now. As makers of narrative screen stuff, we’re encouraged to have a slate, and I guess it’s quite normal now to have that slate spread over various forms. When JJ approached me about Flat3, I had just grumped my way through a year and a half of a sort of post-debut-feature-film creative slump (which is surprisingly common), and it was just the thing I needed to throw my energies in, to remember the sheer joy of making something and putting it out there. The internet is great for that – it was fresh air.

Is there much to compare/contrast with this web series versus film production? Are you finding you like certain aspects of each over others?

Roseanne – I like the time-frame. From conception to going live, it’s much less time, and because it’s ‘just the web’, there is less scrutiny of the creative process than in film (caveat: more scrutiny isn’t necessarily a bad thing when there’s lots of money involved!). I imagine it’s a little like what I used to read about in film school, about Robert Rodriguez starting out and just doing it all himself with no money – there’s a joyful abandon to the web series process that simply wouldn’t be right in a film production. Less money and time = less responsibility = more play, more fun. I also like the small crews, though you’ll have to ask them whether they had as much fun as I did.

How did you go about getting the actresses to gel so well together? Was there any living-together method acting for cast/crew as part of preparation for Flat3?

Roseanne – A lot of the relationships already existed. JJ, Perlina and Ally had met on a children’s theatre production and must have seen kindred spirits in each other. Then from the first time I met them, we were on the same page. It’s one of those synchronicity things that you have to marvel at after the fact. We liked the same comedy, we wanted to go in the same direction, we liked each others’ company. And that’s all the preparation we needed. 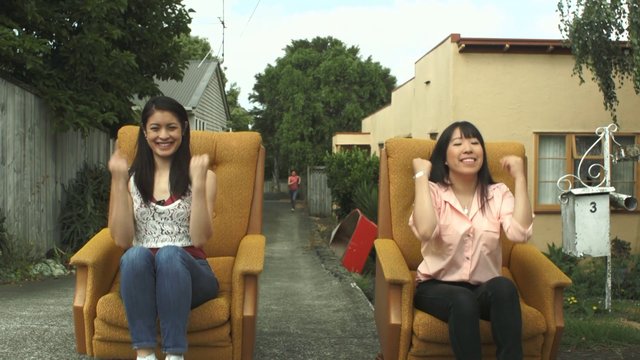 Although I was familiar with your work through what I mentioned in question #1, plus the documentary on which My Wedding and Other Secrets is based, I didn’t find out about Flat3 until it was mentioned on the Angry Asian Man blog. Did you see a huge jump in views from that post? Also, since a web-based series allows for you to better track your viewership, can you tell us a little bit about the geographic-reach of your viewership? Are they primarily Antipodes-based or is there, to coin a word, a ‘Flat3-Diaspora’ in surprising other areas of the globe?

Roseanne – Yes, we definitely got a spike in views after Angry Asian Man’s blog, and we started getting a trickle of comments on YouTube from people who had discovered it through his post. According to the YouTube analytics, we started with very much a NZ skew – 90% plus, but over time, the international viewership has grown to about 40%. The largest audience outside of NZ is not Australia, but the US – we attribute that to Phil’s blog and also other US indie sites writing about it. I guess it’s not surprising given that our biggest influences for Flat3 were things like Girls, Veep, Louie, The Office (UK), and web series like Awkward Black Girl. The next countries after NZ and USA are Australia, the UK, India and Venezuela! Is there a big diasporic Asian community in Venezuela?

Presently, the overall median rental rate for a one-bedroom in San Francisco is, I kid you not, US$2,813. To make your upcoming San Francisco audience envious, what is the market like in Auckland?

Roseanne – Wow, that is insane! In the Auckland suburb of Mt Albert, where Flat3 is, the median rent for a one-bedroom flat is US$237. If you’re flatting with others, one room has a median rent of US$140. Guys, come to Mt Albert! Or don’t. Our precious. This information brought to you by the New Zealand Ministry of Business, Innovation and Employment website.

JJ – Dirty dishes in the sink that have been sitting there for days on end!!

Ally – Hair in the bathroom… If you get my drift.

Perlina – Unrinsed dishes on the bench with food stuck to the plates – bleugh!

Ally – A flatmate decided to have sexy time with her BF in the bathroom one night. Unfortunately my bedroom was next door.

Perlina – Seems I’ve been pretty lucky up until this point so I’ll steal a friend’s story. They came back from summer holidays to find their flat infested with wasps. The carpet in the lounge was a yellow moving, waving mass.

Why am I so negative? Tell me the best thing about having a flatmate.

JJ – The best thing about having a flatmate is someone you can come home and talk to, and eat chocolate at midnight.

Ally – Sharing food – with their permission of course.

Perlina – Having someone there to chat and have gins with!

Do you all pick on the Aussie during filming or does she bribe you with free or discounted eyewear? [Ally lives in Sydney and is an Optometrist by trade, but I soon found out I was mistaken about one thing.]

JJ – Ally gives me free advice on my eyesight and its da bomb! and she’s kiwi…..just living in Aussie for the moment 😉

Roseanne – We will ‘coach’ it out of you when you get back.

Perlina – I think all of us are four eyes on this show – so any eye advice or horror stories always welcome!

You all definitely have a way better chance than I do of meeting one of my life goals, getting interviewed one day by the NZ radio host Kim Hill. If she invites you onto her ‘Playing Favorites’ segment one day, which song would you definitely include and why?

Perlina – Oh I think I would end up picking Nina Simone. She’s just so sassy. Also on a Saturday morning – wouldn’t mind hearing it!