Based on a 2010 novel by Cheon Myung Gwan, the comedy-drama Boomerang Family considers familial dysfunction in South Korea through the problems of three adult siblings who are forced by personal or professional circumstances to move back in with their widowed mother. Failed film director In-mo (Park Hae-il) has been in industry exile for the past ten years following the critical and commercial flop of his debut feature. After discovering that his wife has been having an affair, he is able to work up enough anger to beat up her lover at a snowy riverbank, but subsequently just lies around a squalid apartment that is now three months in arrears. As he is about to commit suicide by hanging himself, In-mo receives a phone call from his mother (Yoon Yeo-jeong) inviting him to come home for a hearty dinner of chicken porridge. On arrival, he finds his older brother Han-mo (Yoon Je-moon) loafing around having moved in due to being unable – or unwilling – to find work because of his criminal history and five convictions. They argue almost immediately, with their mother calmly breaking up the physical altercation by providing some money for a visit to the local bathhouse. However, the family apartment is about to become even more crowded as younger sister Mi-yeon (Gong Hyo-jin), who has decided to leave her second husband, arrives with her difficult teenage daughter Min-kyung (Jin Ji-hee). Much bickering occurs as the siblings readjust to living under the same roof.

Often juggling broad humour, social issues, and unabashed sentiment, director Song Hae-sung addresses the boomerang generation – young adults who move back home due to various level of dependency – with a tough love attitude that at once celebrates family values while still being critical of the personal failings that have resulted in such arrested development. Song allows lifestyle differences, petty disagreements, and buried loyalties to emerge in an unhurried, episodic fashion which is most appropriate as it enables the uniformly terrific ensemble cast to develop a believable family dynamic. In recent years, there has been a trend for South Korean comedies to be unnecessarily busy affairs, with tiring aesthetics that overplay the jokes amidst quick cutting and garish production values. Boomerang Family is appreciably at odds with the status quo with its unfussy visual palette that embraces the inherent messiness of its scenario with humorous exchanges giving way to expressions of cruelty. Everyone here is flawed to some extent – In-mo is the family’s college graduate, but is not above extorting cash from his niece, while Han-mo resorts to underworld connections to solve problems – with Song proving even-handed in his consideration of each sibling’s failings and redeeming qualities. It could be argued that Song’s body of work, which ranges from the romantic drama Failan (2001) to the crime remake A Better Tomorrow (2010), lacks a consistent stylistic imprint, but that proves to be a plus here, as a lived-in charm soon develops through the director’s straight-forward framing and emphasis on performances. 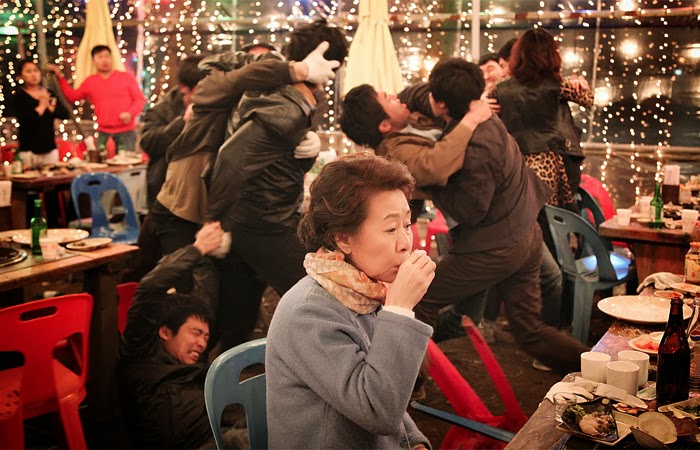 Boomerang Family is at its strongest in showing how a sense of camaraderie can emerge in close quarters, even when the family is seemingly fractured. In-mo and Han-mo team-up to deal with Mi-yeon’s husband, while all the siblings become involved in a fight with the other patrons of a restaurant while their mother quietly carries on drinking without passing judgment. Indeed, many scenes take place over mouth-watering meals, which the patriarch uses to unify the family and to provide her with an opportunity to dispense wisdom that is sometimes vague but always stems from experience. Some of the sub-plots work better than others: In-mo and Han-mo both being interested in the same local hairdresser, Han Su-ja (Ye Ji-won), sets-up a fun rivalry and the former’s efforts to re-start his career leads to an amusing meeting with a porn producer, but the latter’s reconnection with criminal associates is a more formulaic element, injecting a sudden seriousness into a gangster persona that is otherwise largely played for laughs. The third act violence that ensues from this development, not to mention two scenes involving rape, could be seen as examples of South Korean cinema’s propensity for tonal lurches if the lighter sections of Boomerang Family were not tempered with instances of bullying, economic struggle, and domestic abuse. This is not the first film to suggest that the family that squabbles together stays together, but it tackles life’s crushing disappointments with such candour that it suggests a refreshing new direction for the South Korean dramedy.