Beijing Love Story is the kind of crowd-pleaser which is too obviously calculated in conception, execution, and marketing strategy to be completely winning: derived from a popular 2012 television series of the same name, it was allocated the ideal release date of Valentine’s Day to court couples with a combination of brand identity and the promise of a rollercoaster of emotions across multiple storylines. Although perfectly timed scheduling enabled Beijing Love Story to initially capture the hearts of China’s urbanites, its box office reign proved almost as fleeting as Valentine’s Day itself with attendance swiftly plummeting due to the arrival of The Hobbit: The Desolation of Smaug (2013) on the mainland multiplex circuit. A free ticket giveaway to coincide with International Women’s Day has been arranged to reinvigorate interest through word of mouth, although it is unlikely that it will suddenly spur Beijing Love Story to the box office heights of last year’s surprise romantic smash Finding Mr. Right (2013). This is perhaps because writer-director-actor Chen Sicheng has tried too hard to cover all demographic bases with stories featuring characters of various age groups and economic levels, while attempts to secure social media chatter through hot topics (financial security vs. true love, increasingly casual attitudes towards extra-marital affairs) are at times awkwardly juxtaposed with his more sentimental vision of love in the big city. Yet while the film as whole rings rather hollow, its better segments yield momentary rewards due to engaging characterisations and scenarios that, however clichéd, are well-suited to the chosen format. 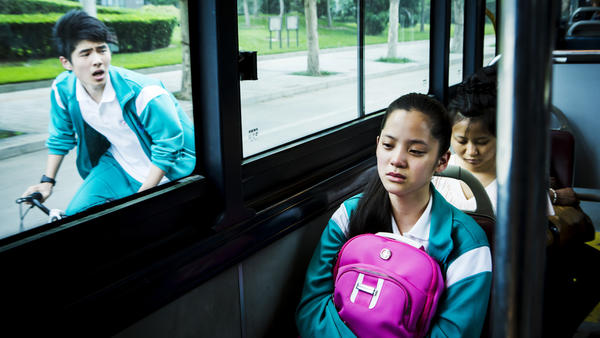 Chen takes an anthology approach rather than the narrative cross-cutting favoured by such similarly-themed East Asian romantic compendiums as Hot Summer Days (2010) and Love (2012). The first story deals with cash-strapped designer Chen Feng (Sicheng) and the wholesome Shen Yan (Tong Liya), whose relationship develops quickly following a nightclub meeting, despite interference from her wealthy ex-boyfriend. When she falls pregnant, money matters begin to rupture their happiness. The focus then shifts to Zhang Lei (Yu Nan), the wife of Chen’s boss, Wu Zheng (Wang Xuebing). She discovers that her husband has been cheating after looking through his cell phone and responds by hitting the late night scene in search of a casual encounter. The third story follows married businessman Liu Hui (Tony Leung Ka-fai) from Beijing to Greece where he has arranged a rendezvous with Jia Ling (Carina Lau Ka-ling), but their passionate tryst is cut short when he realises that she has had cosmetic surgery. Back in China’s capital, Liu’s teenage daughter, talented cellist Xingyang (Nana Ou-young), is due to participate in a televised concert, then leave Beijing to study in England, but still has time for a flirtation with fellow high schooler Song-ge (Liu Haoran). The final story finds elderly choir leader Mrs. Gao (Siqin Gaowa) trying to match-make Song-ge’s grandfather Old Wang (Wang Qing-xiang) with Xue Aijia (Elaine Kam), who has recently returned from the United States following a divorce. Most of these situations play out largely as expected, with a few welcome twists thrown in.

It’s fairly common for anthology features to be book-ended by their strongest segments with the weaker stories placed in-between. Contrary to this tradition, Beijing Love Story actually improves as it progresses with the film really hitting its seriocomic stride when Liu and Jia play a game of truth or day against the stunning backdrop of the Mediterranean. Before that, Chen and Shen seem to be heading for a relationship crisis, only for any sense of drama related to their financial predicament to suddenly dissipate, while Zhang’s unsatisfying walk on the wild side only serves to show the dark side of Beijing club culture. Most touching are the fourth and fifth segments which consider romance at opposite ends of the generational spectrum: the fledgling teenage romance is charmingly innocent, with Song-ge finding ways to help the object of his affection when her dreams of performing seem to be slipping away, while the final story is a nicely observed exploration of elderly companionship. The city is surprisingly anonymous throughout, although cinematographer Song Xiaofei pulls off a few visual jokes at the expense of its pollution level, while peaks and troughs of personal experience are associated with tranquil traditional spaces (the Forbidden Palace) or hedonistic international zones (Sanlitun bar street). Product placement abounds (Dairy Queen must have expected this to be the biggest date movie of the year) and it’s rife with pop promo simplification, but Beijing Love Story just about gets by on a bittersweet sincerity that occasionally shines through the manufactured slickness.